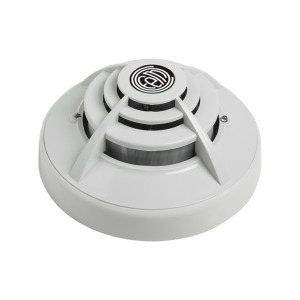 The A30XHTCO has three different types of sensors: one optical smoke sensor, one heat sensor and one carbon monoxide sensor (CO).

The use of the CO sensor is very valuable for the early detection for some types of fire.

As well, the integration with the optical smoke detector inside its algorithm of dynamic processing, give us, as main results, a compact detector very robust facing the false alarms

For complete its benefits, the sensor also has a heat element sets it alarm status when temperature reaches 55ºC.

• Low section, total height less than 53,4 mm (including the base).
• Available with high base for electrical conduit of 20 mm.
• Alarm with two red LED, which makes easier the identification from any direction (360º).
• Possibility to connect  a remote action indicator.
• Easy connection, without polarity.
• A single flash of LED indicators shows communication with the control panel, and alarm status with LED on.
• Indication of contamination status of the sensor in the control panel display (the sensor discriminates between fast alarm signal and slow and sustained small increases due to the accumulation of dust and dirt).
• Dynamic processing algorithm that reduces drastically incidences due to false alarms.
• Detector and base with easy installation, interchangeable with the entire of range A30X, and manufactured in white heat-resistant ABS.
• According to EN 54-7 Standard, and CE mark according to the European Regulation of Construction Products (UE) N°305/2011.