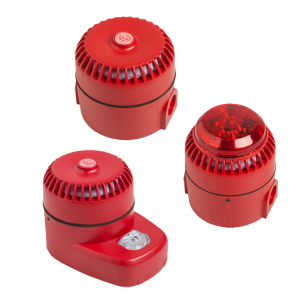 Microprocessed and addressable digital sounder (with short-circuit isolator) which is installed as one more element of the loop.

Microprocessed digital and addressable device (with short-circuit isolator) installed as another element inside the loop. The sounder is made of in ABS heat-resistant plastic red color.

Is a module with a single programming function in terms of the timing and combination of sensors that trigger it. This sounder is configured as a relay acting as sounder.

The variant SIRAYL and SIRAY+BSLC additionally emit light signals, where in addition, the SIRAY+BSLC makes it according to EN 54-23 (visual alarm device). The fact that specifically these sounders emitting light does not affect the programming of the control panel. For this reason, these devices are programmed in the control panel as if they were the reference SIRAY.

It is possible to change the tone and light signal selection, but this operation affects the power consumption of the sounder, and therefore, the consumption of the device points. The bottom figure shows a table of equivalence for tone selections (standard 95 dB – 1m and maximum sound intensity 105 dB – 1m) and visual signal (W-2, 4-2, 37, 5). It is possible to calculate the precise calculation with the software of loop elements capacity.

Internal wiring and other microswitchs positions must be unmodified selected by the manufacturer.