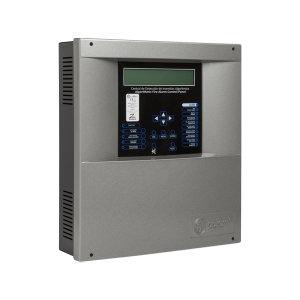 The Zafir Algorithmic Control Panel is EN 54-2 and EN 54-4 according to the latest CE Directives/Regulation.

The Zafir Algorithmic addressable Control Panel is EN 54-2 and EN 54-4 according to the latest CE Directives/Regulation.

The new development of Zafir control panel, allow integration of all the functionality of an addressable algorithmic system in a reduced-dimension cabinet with capacity up to 398 detectors in 2 loops.

The control panel is totally compatible with the Lyon system, highlighting that loop elements (sensors, manual call points, relay modules, masters, analogue sounders and technical signal modules) have the property of being auto-identifiable, that is to say, all of them can be installed with no need for prior manual encoding, facilitating enormously the assembly and subsequent modifications to the installation.

• Control panel configurable with 1 or 2 loops.
• Loop capability 199 points.
• All the points are supervised by the control panel, except the loop isolator KABY.
• Capacity for 64 configurable relays per control panel.
• Can hold up to 99 zones per panel.
• Registry with capacity of 4095 events with date and time.
• Delay of supervised sounder output programmable between 0 to 10 minutes, identified as S1.
• Alarm output as free voltage relay not supervised, identified as ALARM.
• Failure general output, as free voltage relay not supervised, identified as FAULT.
• Allowed to connect addressable sounders in the loop.
• Evacuation push-button.
• Backlit LCD display with 4 lines and 40 characters.
• Incorporates multiple languages by default (Spanish, English, French, Portuguese, etc).
• Configurable with the PC-EASY CoNET software.
• Connectable to external keyboard (standard PC-PS2).
• Access to the control panel keyboard introducing a numeric code.
• Allows connection of up to 8 repeaters and/or 8 control panels in network.
• Contact ID (on specific request).
• Size: 363 x 331 x 96 mm.
• Certified according to EN-54-2 and EN 54-4 and CE mark according to the European Regulation of Construction Products (UE) N°305/2011.